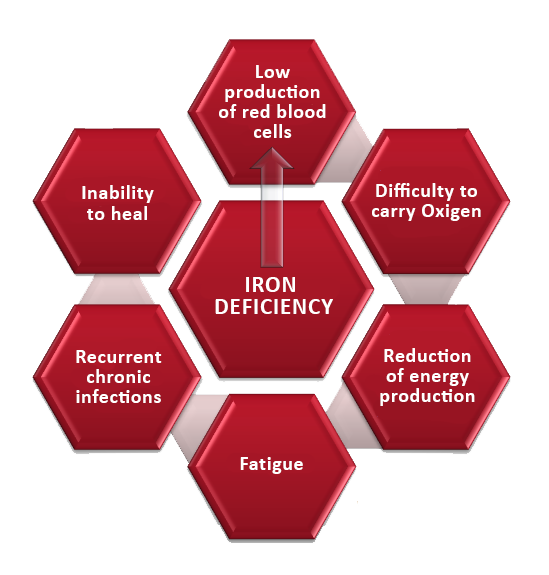 There was a time in my life that I was feeling very tired all the time. I wasn’t sure what was wrong with me so I made a visit to the doctor’s office. Blood test results showed that I had an iron deficiency. Iron deficiency is a common type of deficiency that many people have and don’t even know about and can be caused by numerous things, including poor diet, blood loss such as during menstrual periods, use of certain types of medication and disease. For me, it was a poor diet that didn’t include iron-rich foods and a lot of blood loss during my period.

For each person, the symptoms of iron deficiency can be different. However common symptoms are fatigue, pale skin, throat irritation, chipped fingernails and poor strength. I know if I don’t have enough iron in my system I get extremely fatigued and all I want to do is lay down in bed. There were days that I would call in sick to work because I felt so tired. I didn’t even feel like taking a shower or making breakfast. I felt so weak and helpless. Without adequate iron levels in your system, you may notice that your symptoms continue. My doctor explained it takes a few months for the body to produce a healthy amount of red blood cells.

Doctors often prescribe you iron pills and in some cases, an iron infusion – however, this usually only happens when the iron deficiency is dangerously low. Children can also be iron deficient and they are sometimes given iron orally in liquid forms. The prescribed iron is only temporary then you can make a regular iron supplement a part of your diet.

Anyone can become iron deficient so it’s important to take precautions to avoid becoming deficient. Things you can do to prevent iron deficiency include incorporating an iron supplement in your diet – lean red meat, green vegetables, fruits and whole-grain bread are excellent sources.