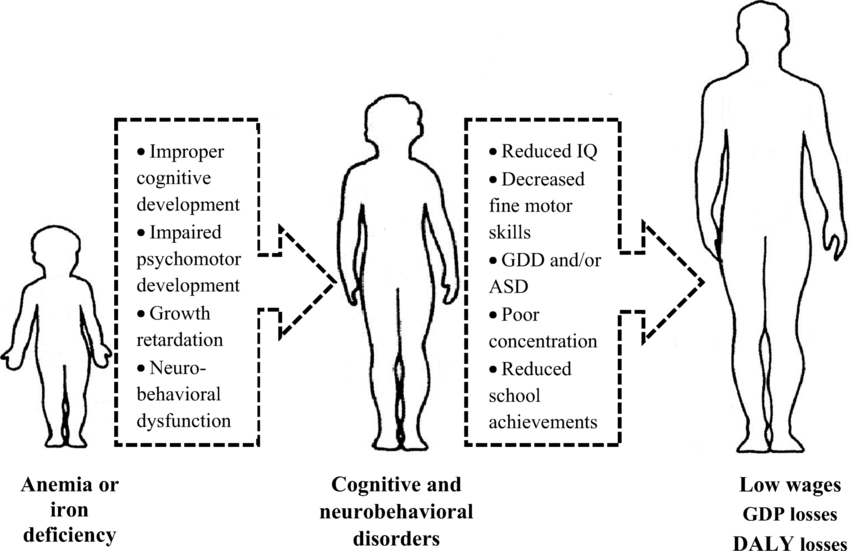 While iron deficiency is not a significant concern for children in the United States, it remains a concern for pediatricians as they conduct routine physical examinations on patients. With associated health complications, pediatricians continue to remain diligent in their management of iron levels in children.

Iron deficiency is a leading cause of developmental disorders in children. While the number of children suffering from anemia and other iron-deficient disorders has decreased in the past decade, there continue to be those children who are misdiagnosed and underdiagnosed with this health complication.

If your child, after age one, is suffering from an iron deficiency, the symptoms of the deficiency may be very subtle. In terms of physical development, you may notice your child is not as advanced as his peers in terms of fine and gross motor skills, even walking later than other children.

Emotionally, children who are deficient in iron exhibit a general sense of fear and unhappiness. Because fatigue is commonly associated with low iron levels, the symptoms may present in a child who is generally crabby and not pleasant to be around. In fact, you may even notice your child does not engage in play activities as often and seems to want to be cuddled or held more frequently than normal.

As a parent of a child who shows signs of anemia or other iron deficiency complications, it is important to manage a healthy diet, including the introduction of foods high in iron, as soon as possible after the first birthday. While we encourage the use of cow’s milk, there is relatively little iron in cow’s milk and, the iron that is present is not easily absorbed by a child’s digestive system. Therefore, the iron intake must come from other food sources. Adding fortified cereals and infant foods that are rich in iron will help to offset these complications.

As with any child development issue, the key to your child’s healthy level of iron lies in strict compliance with the pediatrician’s dietary recommendations. While we commonly believe cow’s milk is an excellent source of nutrition in children, after the first birthday, the reality is that many children consume large amounts of milk and miss opportunities for adequate iron intake. Supplementing milk and dairy products with foods high in iron will work to ensure your child does not become anemic and suffer long-term complications from early childhood iron deficiency.